During the mid 1950s there began a local television tradition that has continued in various forms to this day. As televisions became more common in the home, the movies studios, long hesitant to release movies to the small screen, finally relented and made available movies produced post 1948. As a result of this, hundreds of cheaply made mad scientist/werewolf/cheap rip-off Frankenstein monster type movies became late night filler. The relative in expense of the films made them very attractive to local stations looking to fill airtime and commercial space. But just running the movie wasn't enough. These were films that couldn't possibly be taken seriously.

The show needed a host. Again to keep costs down, use someone already on staff, add some cheap greasepaint, maybe a small set, and just sit back and watch the fun- during the commercial breaks!

The idea caught on and soon local stations all over the country were airing their own version. Many of these hosts enjoy a large following with the internet making it easier for fans of the genre to check out out of area stations and other local hosts. In Chicago, it seems like almost every station had some horror movie show on the air at least sometime during their broadcast existence. Many consisted of nothing more than a slide (and maybe some strange music) with the name of the show. WMAQ-TV ran Thrillerama, WSNS had Monster Rally. For a while, WLS-TV ran horror movies during their "The 3:30 Movie" timeslot.

But there are certain shows that to this day are remembered with good times, a lot of laughs, and maybe just a scare or two- though maybe you probably still wouldn't admit it! 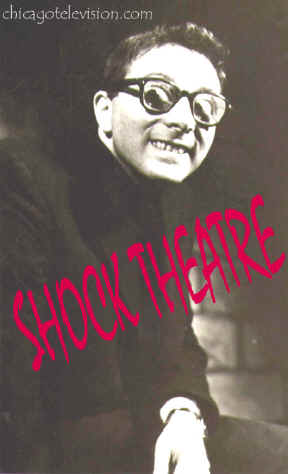 On Saturday, December 7, 1957, WBKB premiered a series called "Shock Theatre" at 10 pm. "Shock Theatre" was the perfect vehicle for an evening around the television set. After popping some fresh popcorn (remember this was way before microwave ovens), turning the lights down low- or off if you dared- the show would be begin with the title of the show appearing on the screen only to shatter like breaking glass revealing a laughing skeleton who beckoned the viewers to "come on in." That scene would segue into the familiar outside view of a haunted house and of course the thunder and lightning as the camera moved toward the only lit window. As the camera zoomed in, you saw bars on the window. The next thing you knew you were in a dark and dismal cellar complete with moss covered stone walls. 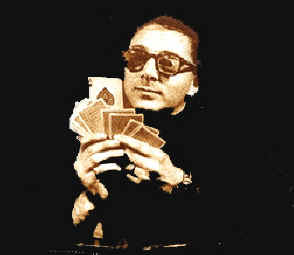 One wonders if Frank Zappa used this series as an inspiration for his "The Torture Never Stops"  opus!

It is here in the cellar that viewers would meet the host, "Marvin," played by WBKB kid show host Terry Bennett. "Marvin" could best be described as a demented beatnik type, dressed all in black and sporting a pair of thick lensed black horn rim glasses. He spoke with a voice that was a cross between Peter Lorre and "Renfield," the hapless sap that unsuccessfully tries to secure a real estate deal with Count Dracula in the 1931 Universal classic "Dracula." Many viewers referred to him as "Mad Marvin." 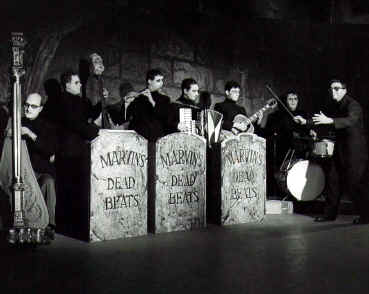 "Marvin" wasn't alone down there in the cellar. He was kept company by his wife who he only called "Dear." "Dear" was played by Bennett's wife, Joy, who also appeared on Bennett's daytime kid show as "Pamela Puppet." You never saw "Dear's" face as the camera was always behind her or her face would be obscured. One was never sure just who or what "Dear" was as it was common for "Marvin" to ask "Dear" to lend him a hand only to get the entire arm instead!  In a glowing letter written about Bennett by former WBKB general manager and ABC-TV vice-president Sterling "Red" Quinlan, Quinlan wrote: 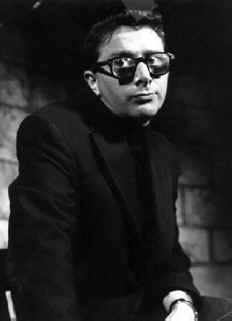 An example of his ability to meet a creative need occurred at WBKB when he was commissioned to come up with a host character for "Shock Theater," a package of horror films.  Mr. Bennett not only came up with a marvelous, grotesque characterization, but he wrote his own material and wrote material for an ensemble of musicians which mounted these films in a splendidly humorous setting.  "Shock Theater" was a huge success as much because of Terry Bennett as for any other reason.  Here is an extremely talented man and I recommend him without any reservations whatsoever. 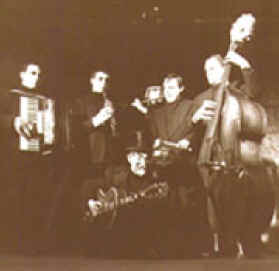 There were other characters on the show including "Orville" the hunchback servant and "Shorty," who bore more than a passing resemblance to the Frankenstein monster.  The show even had its own "shocktale" house band called "The Deadbeats." usually a five piece combo variously consisting of bass fiddle, bongos, guitar, woodwinds, and squeeze box. Dressed all in black, they provided background music while "Marvin" read some offbeat poem or performed hilarious musical parodies.

On the last telecast of "Shock Theatre" viewers finally got to see what "Dear" looked like. The show was being cancelled to make way for ABC-TV's "Fight Of The Week." As the show was winding to a close, "Marvin" turned to his companion and said "Dear, why don't you say good-bye to our friends?" "Dear" then turned around and faced the camera for the first time ever and said "Goodnight!  Talk to you soon!"  The final half hour, normally the Shocktale segment, featured Terry and Joy, out of character, just chatting about the past shows.   Many fans of the show thought it to be the perfect ending. It was August of 1959. Interestingly a similar gimmick would be used on the final telecast of NBC's "Howdy Doody Show" one year later as the always mute Clarabell The Clown said good-bye to all the kids at home and in the Peanut Gallery as that series passed into television history. 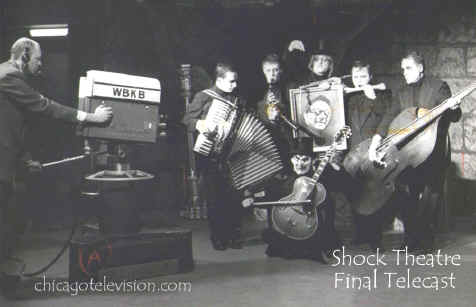 Although not the first program of it's kind, Shock Theatre opened the doors in Chicago television for future similar fare such as Screaming Yellow Theater, premiering a little over ten years after Shock Theatre's demise.  After the series' cancellation, The Bennetts continued to write, produce, and star in Jobblewocky Place weekday mornings on channel 7 until 1962 when they would find stardom again in New York.  Terry Bennett passed away after a two year illness on October 12, 1977. 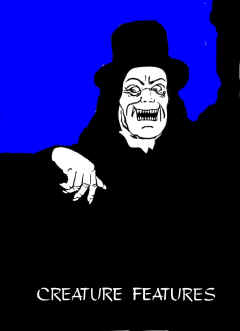 CREATURE FEATURES was WGN-TV's entry and no serious concern for WFLD. Known for it's main title vignettes of Universal Studios classic horror movies set to the haunting guitars of Henry Mancini's theme from the film "Experiment In Terror," and the dark sinister voice of WGN-TV announcer Marty McNeely reading the poem:

Blood runs cold in every man

Fog rolls in and coffins slam

CF amounted to nothing more than a slide shown between commercials with an off camera voice.

The time as come for scary things

With horrible movies all drippy and drooly

and horrible jokes...With me Svengoolie! 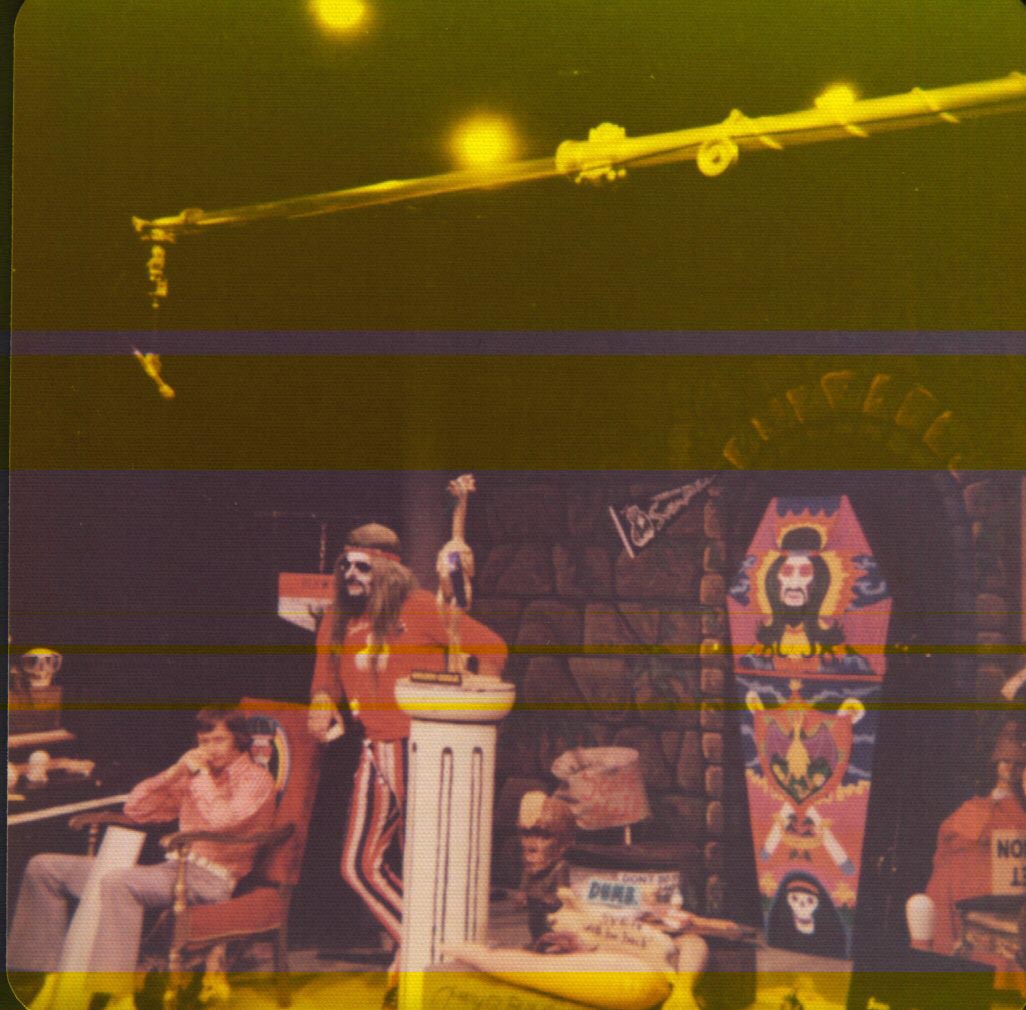 WFLD offered "Screaming Yellow Theater" which in the beginning was very similar to WGN-TV's entry in that it was a slide on air between commercial breaks with off camera announcer Jerry G. Bishop. Instead of Mancini, WFLD had Link Wray's classic "Rumble" (covered by The Dave Clark Five) playing in the background. The addition of a woman belting out a blood curdling scream every 15 seconds added to the "suspense." 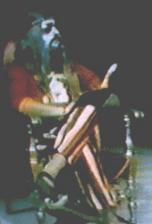 The show was slowly becoming a hit and before long, the "Screaming Yellow Theater" concept was dropped and replaced with live action comedy bits performed by Bishop and written by him and staff writer Rich Koz. 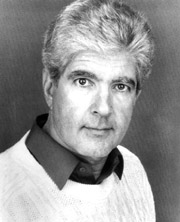 During the show's heyday, it was not unusual to hear and see odd things during the movie that were not there originally. This was the kind of humor Bishop and Koz gave their series and it made the show a huge hit. Sven would appear during the commercial breaks hawking products in commercial parodies (through Sven's exclusive distributor S.T.D.- Sham, Trickery, & Deceit- though most of the time the "D" was changed), welcome local guests, sing songs, and tell stories all with a vaguely familiar "Bela Lugosi" accent. 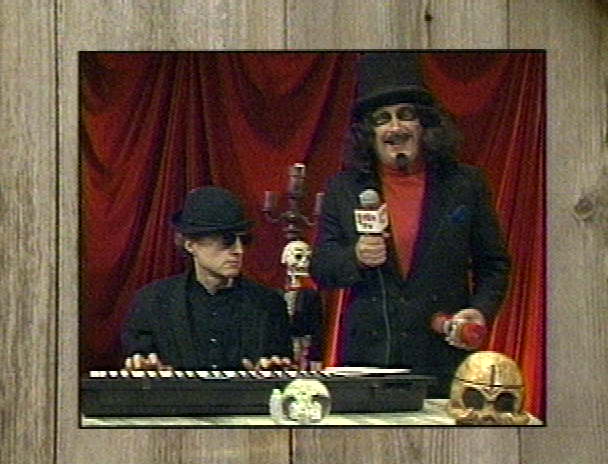 When Kaiser Broadcasting purchased WFLD from Field Communications they had their own ideas on what a horror show host should be. Bishop and Koz were dropped in favor of Kaiser's own "The Ghoul," a character who only lasted a short time in Chicago but is still going strong in other cities. Bishop left for the west coast but before leaving gave Koz permission to use the Svengoolie name.

A few years later, Koz was back at WFLD as the 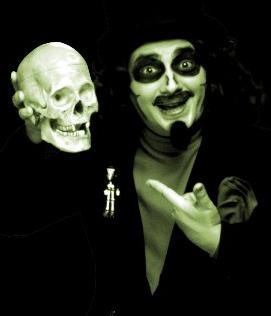 "Son Of Svengoolie: and stayed there until management once again forced his show off the air when Rupert Murdoch's Fox Network acquired the station and felt that a horror host movie show was beneath a new national network.

In 1995 Neal Sabin (who was responsible for turning WPWR into a force to be reckoned with) asked Koz to come over to his new station WCIU which was changing its format to a main stream independent and appear as "Svengoolie." Rich agreed and has been at the station ever since.  In 2005, Svengoolie and Rich's other gig as host  of a two-hour block of classic Three Stooges shorts were moved to WWME-CA on UHF channel 23.

A special thanks to Ken Kwil for providing information on WBKB's Shock Theatre.

CHICAGO CHILDREN'S TELEVISION IS NEXT